Ryan Songalia, a Filipino-American with mixed-roots, moved from New Jersey to Bonifacio Global City where he faces questions about his cultural identify.

“Still, it underlines my quagmire: I’m too white to be Filipino, and too Filipino to be white.

So, if I’m “not a Filipino,” then what is a Filipino? Is it only someone who is a native born to the Philippines?

…The issue of cultural identity was one that I often examined as a child growing up with family members who were of European, Chinese and African-American descent. My father, who was born in Leyte but hadn’t been back until I was already grown up, never spoke much about the Philippines, except when discussing Rolando Navarette, Andy Ganigan and other Filipino boxers he appreciated in his younger years. My mother is fond of saying that I’m not one thing, but a mixture of the many influences I was surrounded by in my melting pot of a family and community.”

Posted on behalf of Philippine Generations.

In the Filipino language, a Christmas lantern is called a Parol. There’s no greater symbol of the Filipino Christmas spirit than this; it is our Christmas Tree. All through the Christmas season, star-shaped lanterns can be found hanging outside homes and along the streets of cities and small provincial towns, farms and fishing villages.

This Christmas, Philippine Generations is inviting everyone to take time away from the Christmas rush and join us to learn a new skill and keep this tradition alive. This will be our third year of hosting the parol workshop and it will be bigger and better than previous years. During the workshop you will learn how to make Filipino Christmas lanterns the traditional way, from bamboo sticks and rice paper. The workshop is open to everyone – young and old, Filipinos and non Filipinos, and across the range of artistic abilities.

**REGISTER BETWEEN 25TH OCTOBER AND 25TH NOVEMBER TO RECEIVE A 30% EARLY
BIRD DISCOUNT. CLICK HERE FOR THE DISCOUNT CODE. 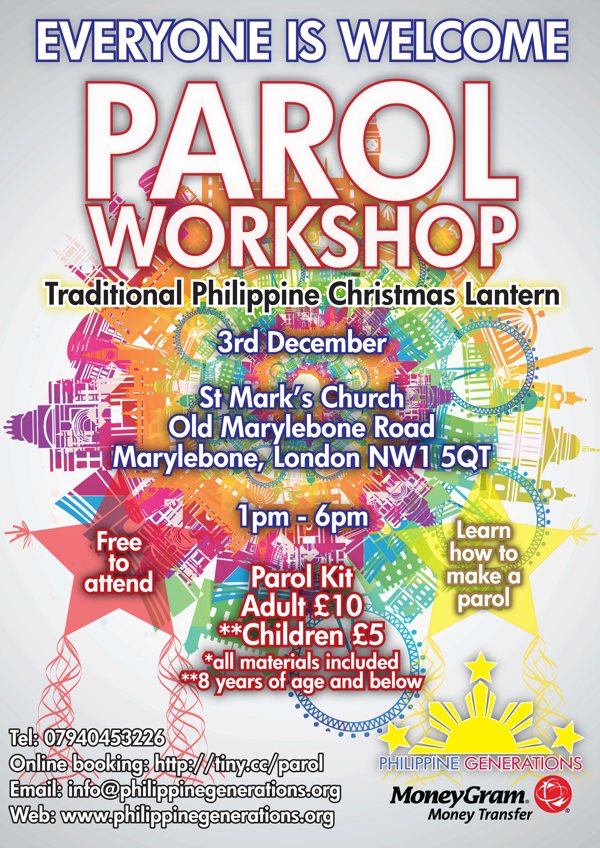 Getting to the heart of the Pinay’s Madonna-Whore Syndrome. Is the modern Filipina well-informed enough not to fall into bad situations? Or are we unknowingly contributing to our own problems?

“Filipina on Top” is also directed by Kamil Roxas, winner of the Hayah Film Competition at the Middle East International Film Festival (MEIFF) in 2008. It talks about the sensitive yet significant issues concerning Filipinas, hoping to create awareness on the harsh realities Filipinas face and, at the same time, provide relevant information and worthwhile advice.

The film discusses the various attitudes towards pre-marital sex and the complex conservative-modern value system of Filipinas. Also tackled in the film is the lack of sex education in the country, contrasted with the omnipresent influence of the highly sexualized Philippine media and how all these shape cultural attitudes, behaviors and the choices Filipinas make for themselves.

Other prevalent concerns among the Filipinas tackled by the film are unwanted pregnancies and sexual harassment – the latter, furthered by Illustrado Magazine’s random survey of around 100 Filipinas in the ages of 20 to 50 years old based in the Middle East, where 75% said that they have experienced sexual harassment of some form, whether mild or serious (where sexual harassment is defined as unwanted sexual advances, request for sexual favors and other verbal or physical conduct of a sexual nature that tends to create a hostile or offensive environment).

According to Illustrado Magazine’s Publisher and Editor-in-Chief Lalaine Chu-Benitez – “While the debate continues on the decaying moral values in Philippine media, especially after the Willie Revillame TV5 fiasco; while the RH bill remains a bone of contention; and more conservative villages follow Alabang’s footsteps seeking to ban the sale of condoms, and artificial birth control without prescription, Filipinas in the Middle East are already on ‘stage three.’ They are experiencing the repercussions of our contradictory value system – suffering sexual harassment of various forms, while some have been jailed due to unwanted pregnancies and illicit relationships (sex without marriage). Clearly, something’s wrong here and we need to wake up and do something.”

Speaking on Illustrado’s Women of Substance advocacy, she says, “Last year, with the showing of the mini-documentary ‘The Empowered Filipina’, we were able to call on our fellow Pinays around the world to uplift themselves despite prevalent negative stereotypes. This year, we would like to encourage them to take charge of all aspects of their life, to protect themselves and to safeguard their situation, as well as future.”

Dubai-based award winning director Kamil Roxas comments, “I think a documentary has always been a beautiful medium and a vitally necessary form of information. Filming ‘The Empowered Filipina’ and ‘Filipina on Top’ with Illustrado’s Women of Substance team is indeed a privilege. I’m pleased that they use this medium of communication to aim for significant awareness campaigns.”

“Because of the cultural sensitivity of the topic, we ensured that we were careful on how we presented the issues, the differing opinions on the matter and as always, the film ends with a call to action and that is for Filipinas to take charge,” Kamil concludes.

The film, which is slated to be screened in various community events, in the UAE, Gulf and other parts of the globe through voluntary and charity groups, will also facilitate the launch of the spin-off “Pinays Take Charge” campaign where Filipinas are invited to pledge on a specific 10-point guideline hoping to inform, educate and alert them on how to handle compromising situations.

Illustrado’s Women of Substance 2011 is a project done in cooperation with Dove and Nikon, and supported by London Dairy, SM Development Corporation and Anlene.

On my first day in Manila, I walked down to the local cafe and was served by a smiling young girl who wore a name badge entitled BumBum…

One of the things that characterises the Filipino parenting style is a focus on academic success. For Filipino parents, education is crucial and subsequently, the brightest children are placed on a pedestal while those with bad grades get strong reprimands. This, I think, can lead to a strong fear of failure. Rather than taking on the more difficult challenges, children who wish to please their parents quickly learn to opt for the those that have the highest chance of success. After all, good grades led to praise whereas failure only means a taste of tsinelas.

Filipino schools just add to the problem. Pressure from both parents and administration make teachers very reluctant to fail students. An industry professional who was offered a teaching job recently commented, “One of the reasons I refused [the job] is that if I fail 80% of the class [who were underachievers], I would be kicked out. Incredible. Raise the standards, and you get the boot. Keep them low, and you stay on forever.”

Ironically, the Filipino parent’s over-emphasis on success may restrain excellence and encourage mediocrity. It could help to explain many of the challenges our country faces. Maybe rather than being afraid of failure, we should accept it as being one of the key ingredients for innovation. Poor students should fail but we should also reward those who bounce back after hitting the dirt.

According to Randy Nelson, dean of Pixar University, a professional-development program for the well-known animation studio, the core skill of an innovator is error recovery, not failure avoidance. Perhaps if we change our attitude to failure, we may help raise a generation of innovators for the Philippines.

“Pixar University’s Randy Nelson explains what schools must do to prepare students for jobs in new media.” http://www.edutopia.org/

Sunny Vergara, in his American Pop blog, writes about how he doesn’t like losing his Tagalog accent. The implication in his post was that losing your accent was like losing part of your identity. He disliked people pointing out his American accent, presumably because it made him feel less Filipino.

I’ve heard this opinion many times before but just don’t buy into it. Why should improving your language skills suggest that you’ve turned your back on your background? Surely a big part of mastering any language is to try speaking it like a native?

We had to learn French and German at School. Aside from learning grammar and vocabulary, the top students tried to lose their English accent. None felt that this would somehow make them less English. For them, it wasn’t even an issue. Why is accent such a big thing with us Filipinos?

Jimmy Soriano, a Manila Times columnist, writes about his view of the Filipino psyche.

While UK-born second-generation Filipinos share some of these traits, I notice that they’re also the cause of conflicts between us and our ‘first-gen’ parents, friends and relatives. I’m specifically referring to his point about Filipinos being reactive and unwilling to openly settle problems.

What do you think?

It is safe to assume that Filipinos, as a people, are among the ‘easily pleased’, as compared to the other nationalities of the world. This notwithstanding, they also get hurt very easily, very onion-skinned in a manner of speaking. Little things make Filipinos in general happy but even the slightest incident could also trigger their disappointments.

A visitor recently objected to my post that asked for people interested in helping with some background research about balut.

Perhaps this human interest story regarding the balut, is merely another way to make the Filipino appear less civilized and more barbaric. I hope you reconsider encouraging anyone of our people to go on television and allowing others to make us look foolish.

This struck me as strange. I don’t think that there’s any reason why balut itself would make Filipinos appear barbaric. Sure, it’s an unfamiliar delicacy to most people in the West. But does the secret blend of 11 herbs & spices make KFC more civilised?

Don’t get me wrong—I happen to think that KFC is finger lickin’ good. However, perhaps this visitor’s comment is more evidence of that old bugbear otherwise known as colonial mentality. Some Filipinos seem to project feelings of inferiority and this is evident in the UK as well as in the Philippines.

It’s sad that we should feel embarrassed about something as simple as food. Food is what helps define our culture and just as we should be proud of what we are, we also shouldn’t be ashamed of what we eat.

What do you think?

There’s an interesting discussion in Filipino Voices about changing ‘the system’ to improve the Philippines. It’s well worth a read:

Personally, I don’t think things will improve until certain aspects of Filipino society changes. You can alter the system as much as you like but if people approach things the same way, the end result will be no different.

Here’s a useful site for second-generation Filipinos who want to learn Tagalog.

If you grew up in the UK and never learnt Filipino, take a look at Manuel Viloria’s Pinoy Podcast. You can subscribe and load them into your MP3 player for those tube journeys. He also has a web player so you can listen directly on the site.

Manuel’s already on Episode 40 so there’s lots of catching up to do.