A TV production company is looking for young people with a South East Asian background to take part in a series revolving around food. The programme will take people on a cultural journey to South East Asia to give them a chance to see where and how our favourite foods are made.

Does food play a major role in your life?

Ever wondered where your food comes from?

Have you never had the chance to visit Asia?

We want to give you the chance to travel to South East Asia to find out how the food we eat is made.

I’ve just discovered Up Dharma Down. Does anyone know more about them?

Tasmin Poynton, one of our visitors, wanted to let us know about her place in the Miss Fresh Photographic competition.

Tasmin: "I’m 18 and live in Wiltshire, my mum is from Philippines (wooo) and my dad is English. To my knowledge, I am the only Filipino girl in the heat, and would love to become the first Filo-English Miss England! I am a black belt in kickboxing, I have been doing the Filipino martial art kali illustrisimo for about 3 years now, and I also have a keen interest in music: having a grade 2 in clarinet, grade 4 in violin, and grade 6 in piano. After I finish college, I would love to stay with my family for a year in the Philippines and do some sort of charity work, including help street families and children. By becoming Miss England I feel that I will have the ability to achieve this, as well as various other voluntary work all over."

Here’s the text from her promo poster: 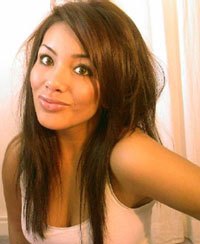 Tasmin needs your support to help win in the quarter finals for the Miss Fresh Photographic title. You can vote for Tasmin by texting TASMIN POYNTON TO 84205 or vote from a landline which is 0901 6561500, and enter the unique number 18 when requested (votes costs 60p plus standard network charge)

Thank you all in advance for your support.

Over the past few days, the Filipino community has been brewing a storm over Episode 4 of the ‘Harry and Paul’ show. It contained a short sketch featuring a Filipina maid which some people found offensive enough to start a petition.

I don’t watch the show but caught the clip via the BBC iPlayer service. Personally, I think that the those complaining missed the real butt of the joke and that the issue was being blown out of proportion.

It was not the Filipina maid who was being mocked. The target was the British class system and culture. The skit ridicules stereotypes of the dim-witted Northerner and the pompous upper middle-class Englishman. What you see in the ‘Harry and Paul’ comedy series are typical examples of British self-deprecating and satirical humour.

The Oxford English Dictionary defines satire as:
“the use of humour, irony, exaggeration, or ridicule to expose and criticise people’s stupidity or vices, particularly in the context of contemporary politics and other topical issues.”

You will find that this explains the comedy series perfectly. The same episode similarly pokes fun at Americans, South Africans and Russians, but above all, it mocks the latent stupidity within British culture.

Folks, this show is about British people laughing at themselves, not Filipinos.

As a community, we cannot overreact at every hint of perceived offence to our culture. We have more important things to be concerned about, such as the foreign national ID card. The National ID card and National Identity Register are serious intrusions into our right to privacy and freedom. For more information, please see no2id.

Edit: I’d just like to point out that these are my views. I’m not speaking on behalf of the Filipino community or anyone who is or has been associated with Phil-UK.

Here’s a clip showing the sketch: